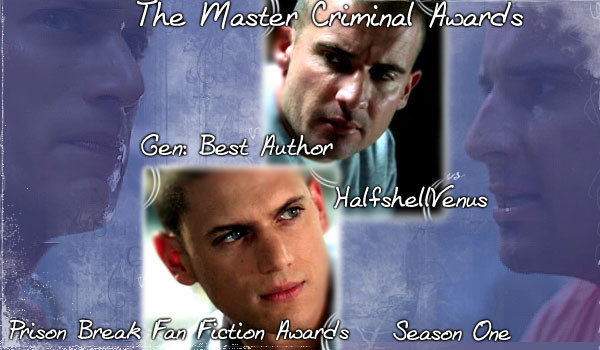 I have accepted several writing challenges for Prison Break, including the

philosophy_20 challenge, with a claim of Prison Break, General Series. Stories are mixed in below, or can be found through my prompt table here.

** Michael and Lincoln ** (I have this Genfic pairing for

prisonbreak100. My table is here). Some stories are filed instead under Lincoln's POV or Michael's POV below.
— FluffyFic with kid!Michael and kid!Lincoln. A family trip on a perfect summer day.
— Humor. Lincoln's POV on the dark side to Michael's persistence. Features Plumbing-Fu.
— Five first things Lincoln did after escaping Fox River prison.
— Kid!Fic: Lincoln and Michael and a boring, snowy day.
— Post-escape AU: Better bonding through bitching.
— Pre-Series to S1: Brothers from the very beginning, no matter what happens.
— Kid!Fic, where Mom is gone and the trouble makes itself.
— Early S2: T-Bag is the one person Michael never plans for who just keeps on showing up.
— To early S2: They're nothing alike, but yet balance lies between them.
— All dialogue humor: Lessons in the art of brotherly irritation.
— CRACK humor version of early S3, in which the brothers are not getting along so well (just like canon).
— Taking stock, down to the last Tootsie Roll, after Halloween.
— Stuck in the car with Michael for hours: road trip, or is it more of a road trap?
— An AU off of Season 1's "By the Skin and the Teeth," where Michael must figure out a way to survive Lincoln's execution.
— (Christmas) Michael's projects don't always turn out the way he'd like.
— Making your own Christmas, even when money is scarce.
— Michael and Lincoln never had the luck that other people did…
— Yet another of Michael's plans that doesn't go as expected.
— Michael rejects and embraces all the things that confine him, again and again.
— A death match between brotherly bonding and persistent paranoia. Which will win?
— Even on the run, Lincoln's mistakes still have a way of finding him.
— The brothers take in a ballgame.
— What was that noise?
— Michael's scheming just may have finally turned the corner...
- It used to be something to cope with. Who knew that it was destined to become important?
- When Michael planned the escape, it was never supposed to go like this.
- Some things are even more ridiculous on paper.
- Michael and Lincoln kill time during a power outage. Someone wins.
- Lincoln had never been where Michael was going.
— Lincoln’s choices, and where they led.
— These are the burdens of being the big brother…
— Too much waiting and thinking.
— Lincoln and the prison chaplain work toward better understanding.
— Lincoln's eyes witness every sacrifice Michael has made for him.
— Missing Scenes from "The Rat": The hidden moments during the relentless march to the end.
— Post "By The Skin And The Teeth": Did it already happen? He can't remember...
— 50 sentences on the life of Lincoln Burrows for

1character
— Lincoln vs. T-Bag. An often irresistible force meets an immoveable object...
— Lincoln/Sara, Michael story for PB Fic Exchange2: It had started with a look...
— PreSeries story: Good intentions alone are not enough.
— Must-read crackfic, with Beverage Alerttm.
— There is no fury like a woman scorned...
— Lincoln can remember all the places he'd rather be.
— After dark, this is where Lincoln's thoughts turn…
— When Lincoln looks back on what he's done, all his failures confront him.
— Lincoln finds that he and a certain man of mystery have a lot in common.
— Even on the run, Lincoln's mistakes still have a way of finding him.
— In this pre-series encounter, paths cross and sparks ignite.
— He didn't do it, and somehow he needs her to know that.
— It was the last time that hurt instead…
- After leaving prison, Lincoln searches for a sense of who he still is.
- It was all coming to an end for Lincoln.

Michael
— The loneliness of the scheming mind.
— Where does the road to apathy begin?
— As the title says...
— Michael tries to remember his mother even as important things about her slip away.
— Michael's father is hardly deserving of that name...
— Michael's first job after college is like entering a new world.
— Perspectives on Michael: if families were chosen and not born...
— Michael vs. TMI again and again and again...
— What is father's day for someone without a father?
— This is the other side of being a genius.
— (Season 2) The legacy of plans, choices and dreams.
— Post-escape AU: Things fall apart in the hideaway shack.
— Season 2: Michael's plan was no match for reality.
— Michael and Sucre: an uncomplicated friendship for a complicated man.
— Michael's choices in saving Lincoln become the chains of his very soul.
— Pre-Series Young Michael: His ears are full of the sound of his own breathing as he listens for the footsteps he fears…
— Figuring out who they are together and how to live now that new possibilities are all that remain.
— Michael hopes now for things he doesn't even believe in…
— (Pre-Series) Everyone has secrets that protect someone else…
— Michael rejects and embraces all the things that confine him, again and again.
(S3) - Every day counts, as Michael battles a timeline that’s running out far too fast.
(S1) - With Michael, hardly anything is as simple as it seems.
- Five years ago, Michael never would have done this…
(Michael, Veronica)- It was impossible to think they could save Lincoln, but just as impossible not to try.
— Theodore Bagwell was not a forgiving and forgetting kind of man.
— His toys never lasted, and the good ones were hard to find.
— 5-part arc, from T-Bag's beginnings through Season 1. It was in the blood, right from the beginning...
— Early S2: T-Bag is the one person Michael never plans for who just keeps on showing up.

Sara
— She could be anywhere, even now. Why Fox River prison?
— 50 sentences on Sara Tancredi for

1character.
— What is the legacy of perfect love, and of its loss?
— Lincoln/Sara, Michael story for PB Fic Exchange2: It started with a look...
— There are messages within messages, and sometimes she wonders just what Michael is saying.
— Figuring out who they are together and how to live now that new possibilities are all that remain.
— In this pre-series encounter, paths cross and sparks ignite.
— He didn't do it, and somehow he needs her to know that.

Other Characters
— 50 sentences on Prison Break for

1fandom.
— Revenge-fantasy on everyone's most hated FBI agent...
— C-Note preferred more subtle methods.
— He used to love her...
— He's gunning for her love, but Sara keeps moving out of range.
— he didn't used to be that man...
— Pre-series look at the childhood Kellerman finally abandoned behind him.
— LJ waits for someone to say something real.
— (Pre-Series) Everyone has secrets that protect someone else…
— Once, almost too long ago to remember, this was about his family.
— In that garden, his secret was just waiting to be discovered.
— (Angst, Slash) Michael is the dream Alex can't stop chasing, even when he's not sure it's actually real.
- Michael was the adversary of a lifetime.
— There is no fury like a woman scorned...
(S1) - Sucre left, not for long, and now he was sorry.
— Veronica's choices all have reasons.
— What love has cost...
— It was the last time that hurt instead…
— He is the warden, the power, and the caretaker of souls.
— Short ficlet. A promise to forego is not a promise to forget.
— Lots of theories have exceptions. Henry just didn't expect this to be one of them.
(S1) - With Michael, hardly anything is as simple as it seems.
— Must-read crackfic, with Beverage Alerttm.
— You'll laugh and Michael will cry in this entirely different and rude take on early Season 3...
— Why the chicken crossed the road, Prison Break style.
— Lincoln finds that he and a certain man of mystery have a lot in common.
— Michael's scheming just may have finally turned the corner...
- Some things are even more ridiculous on paper.