About a year and a half ago, HalfshellHusband (HSH) was diagnosed with arthritis in his knees. That, by the way, is the kind of crap your body pulls as you get older and it starts thinking about breaking up with you. It doesn't want the drama of a big, ugly discussion, so it goes the passive-aggressive route instead of talking things over like a grown-up.

The treatment for HSH's knees is to ice them for about 20 minutes after exercising. Since that left him stuck in the kitchen listening to music that whole time, I suggested he "mouse" the cat then too, since Kasha loves having someone work the catnip mouse for him and he never gets enough playtime.

(That last part isn't because we don't play with the cat, it's because he's never ready to be finished playing.)

The arrangement seemed to go pretty well for the two of them, although I found the mouse and its stick in the diet-soda cupboard in the pantry one day, and had to ask what that was about. HSH said the cat loved the mouse too much, so he hid it between play sessions to keep the cat from destroying it.

Meanwhile, the cat had gotten smarter about how the whole routine worked. When HSH returned from a bike ride, Kashka sometimes hopped up on the counter under the toy mouse's cupboard, just to make sure playtime would not be forgotten. After a couple of weeks, he skipped that part and just waited by the table for HSH to sit down. Soon after, he was able to wait without howling at HSH over and over to start playtime now. \o?

That was what I saw on the weekends, anyway. Then, the COVID pandemic started.

Suddenly, I was at home during playtime every day, getting a much closer look at some of the weirdness that had been going on when I wasn't around.

I would overhear snatches of conversation from the kitchen, things like, "Come on… No, you're not even trying. Do I have to take it away?"

Between all that and keeping the mouse hidden in the cupboard, it started to seem as if HSH was involved in some kind of weird power struggle with the cat over that toy. Good grief!

Every now and then, the cat would try to get the mouse out of the cupboard himself, but never quite managed it. Once, HSH opened the door and discovered that Kashka had somehow made it all the way into the cupboard. The cat was just breadloafing on the shelf in there like, 'Hi. Nothing to see here. Carry on."

That kind of cat behavior cracks me up. It's like the other night, when I took off the fleece jacket I wear around the house and wadded it up next to me on the sofa. At some point, I looked over and found the cat sitting with his front paws on it, going tchoo-tchoo-tchoo-tchoo-tchoo-tchoo. While I was boggling at him, his eyes slid over sideways to look at me like, "Hey, this is totally normal, everyone does this…"

It turned out that HSH was right about the cat liking the mouse too much, though. Kashka basically shredded its "underbelly," and since it was made of a big, open weave, the whole thing started to unravel. Tragedy! HSH asked me to see if I could fix it.

We used to have a fancier stick-and-string toy, which had ropelike string and a Velcro pad at the end. It came with five different attachments, for variety, which was pretty neat. That toy had survived (and sometimes frightened) two previous cats, but Kashka would attack the stick and chew on it every time he found it, and he eventually managed to destroy the plastic cap that held the string to the stick.

The new toy he liked so much was similar, in that you could snap different 'heads' onto the end of the elastic string. The mouse just happened to be Kashka's favorite, but it was part of an overall toy "system" that made it worth it to try to fix that attachment.

I bought a dollar-toy from Rite Aid that had many of the same mechanics, i.e., a stick with a catnip toy at the end of an elastic string. Kashka played with that in the interim while I worked on repairing the other one.

The main challenge in fixing his "mouse" was the fabric. So many catnip toys are made with soft, regular-weave cloth, and none of those ever seemed to interest him. The mouse was something he could sink his fangs into, and that was clearly part of the attraction. I Googled rough, coarse fabrics, and I think the closest match I found was boucle, but it didn't seem worth a trip to the fabric store to get it. We already had a small burlap bag in the storage room (it was a Christmas gift-card holder), and burlap was close enough.

I cut the bag in half, so that it would cover up most of the "mouse". Then I sewed it around what was left of the mouse, to reclaim it:

Kashka was very happy to have his mouse back, and chomped on it with huge enthusiasm: 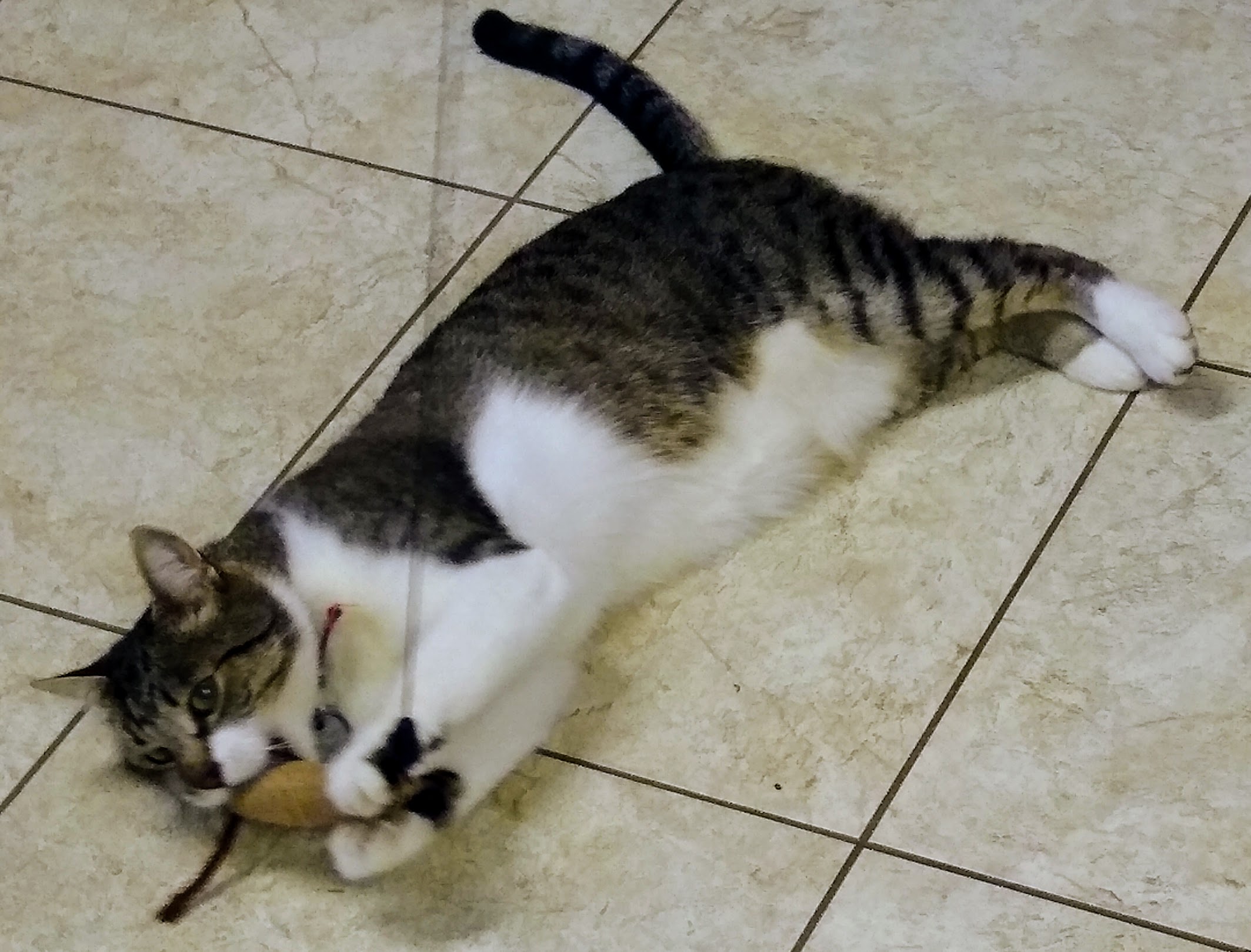 But he'd also gotten very attached to the new toy, and seemed to prefer it! Nobody even thought that was possible.

The new toy is a catnip fish, and while it does have some tantalizing ribbons dangling from the end, it doesn't have that nice, fangable body. But that may also be why it has unseated the mouse.

There were times when HSH and Kashka would play with the mouse, and Kashka would start moaning like he had a tooth caught on it—or he would try to run off with it, which HSH never allowed because the things was already pretty destroyed.

But the fish is in better shape. So, HSH let Kashka carry it away just to see if that was what he wanted. And it was—he desperately wanted to take it into living room for "special noms" or something. Who can say?

I was in the living room a few days later, and that cat came trotting in there with the fish in his mouth and the stick dragging behind him. He moaned this "NgRERR…ngRERR…ngRERR" through the fish, and then he put it down on the carpet and went over to the fireplace to apparently howl at his reflection in the glass. Then he howled at me. Then he went back to the fish and nibbled it a little, before patting it with his paw and staring at it for awhile. Eventually, he wandered off and wound up back in the kitchen, where he wanted HSH to play again with the toy that he'd left in the other room. \o?

So, this is the cat's thing now. Sometimes he wants to run off with that fish when he's only been playing with it for about four or five minutes (or yesterday, 90 seconds). And always with that moaning, which is super-annoying. I'll hear it from my office while I'm trying to work, and say "Stop!", and HSH will say, "He has his toy..."

Plus, before long, the cat always goes back to the kitchen ready to play again, but the toy he wants is still in the living room. It's too much for his tiny little brain.

The living room already has most of his toys, including a catnip bat, squirrel, and peacock for him to chew on, if that's what he's after. But they aren't the same, because those toys have never been "alive." Even though part of him knows that he needs a human to make the mouse or the fish work the way he wants, he also thinks those toys are more special because they "move."

And what's worse, we may have created a monster in letting him run off with the fish. Because, while the fabric is far more durable than the original mouse was, he has found new ways to destroy it. Including the product tag I left on, because it was yet another dangly thing, so why not? 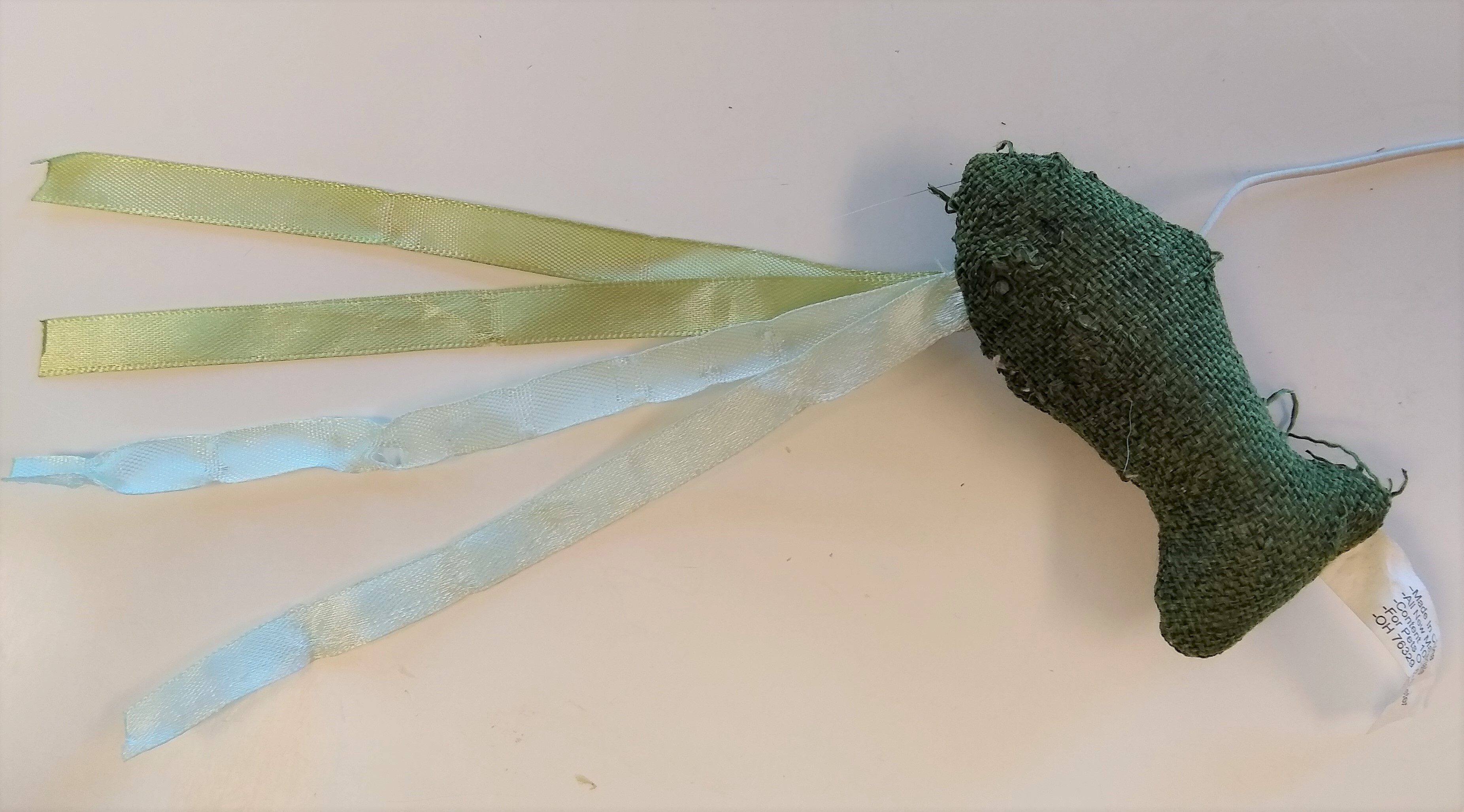 I caught him holding that thing down with his paw yesterday, and trying to shred the tag with his teeth.

Mr. Fish, I am sorry. I thought you were a temporary distraction, but I fear you are already on the road that leads to your Fate. :(