Now that the "Grow-it-yourself" Homeropus is out of the water, he's slowly shrinking: 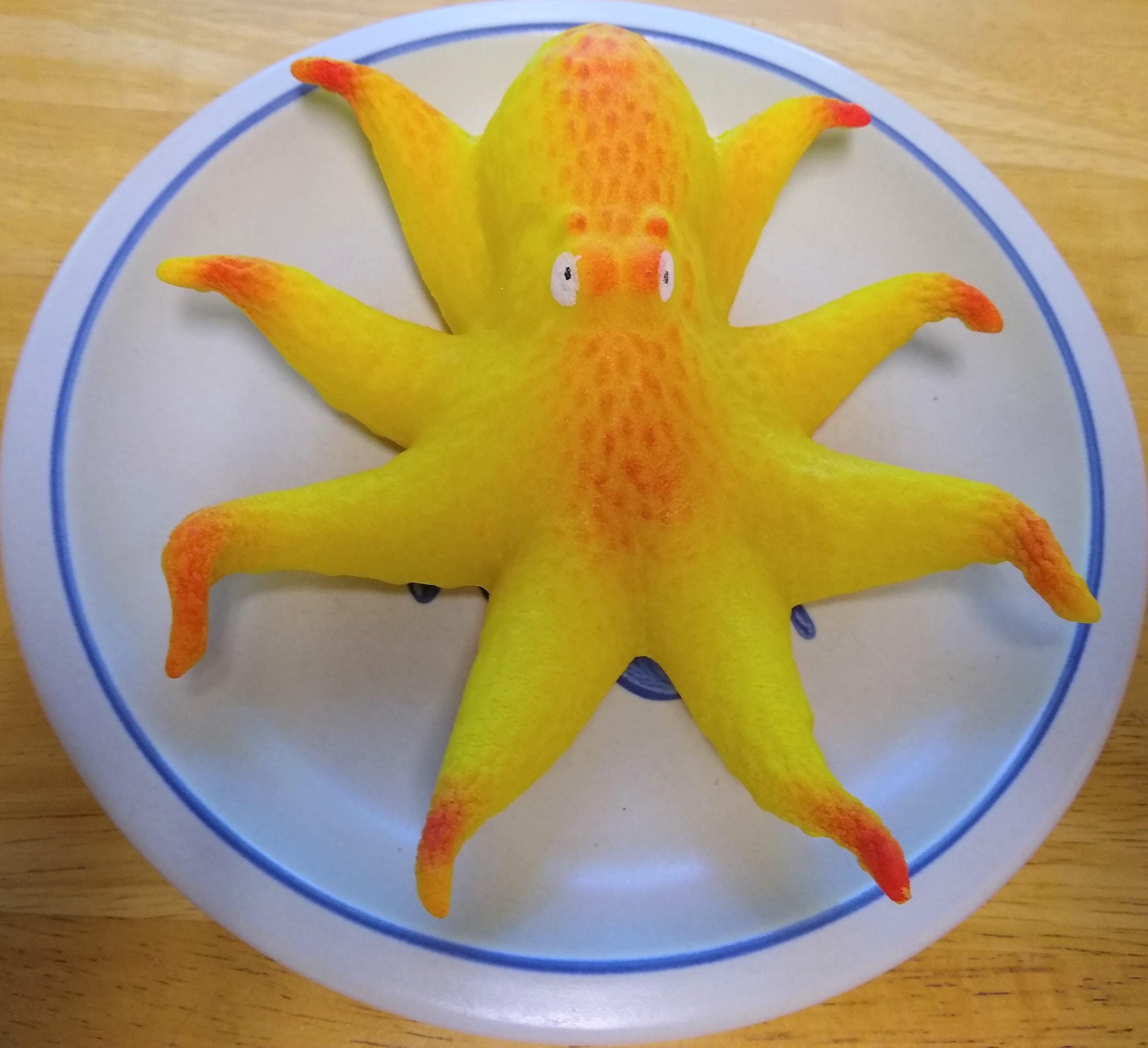 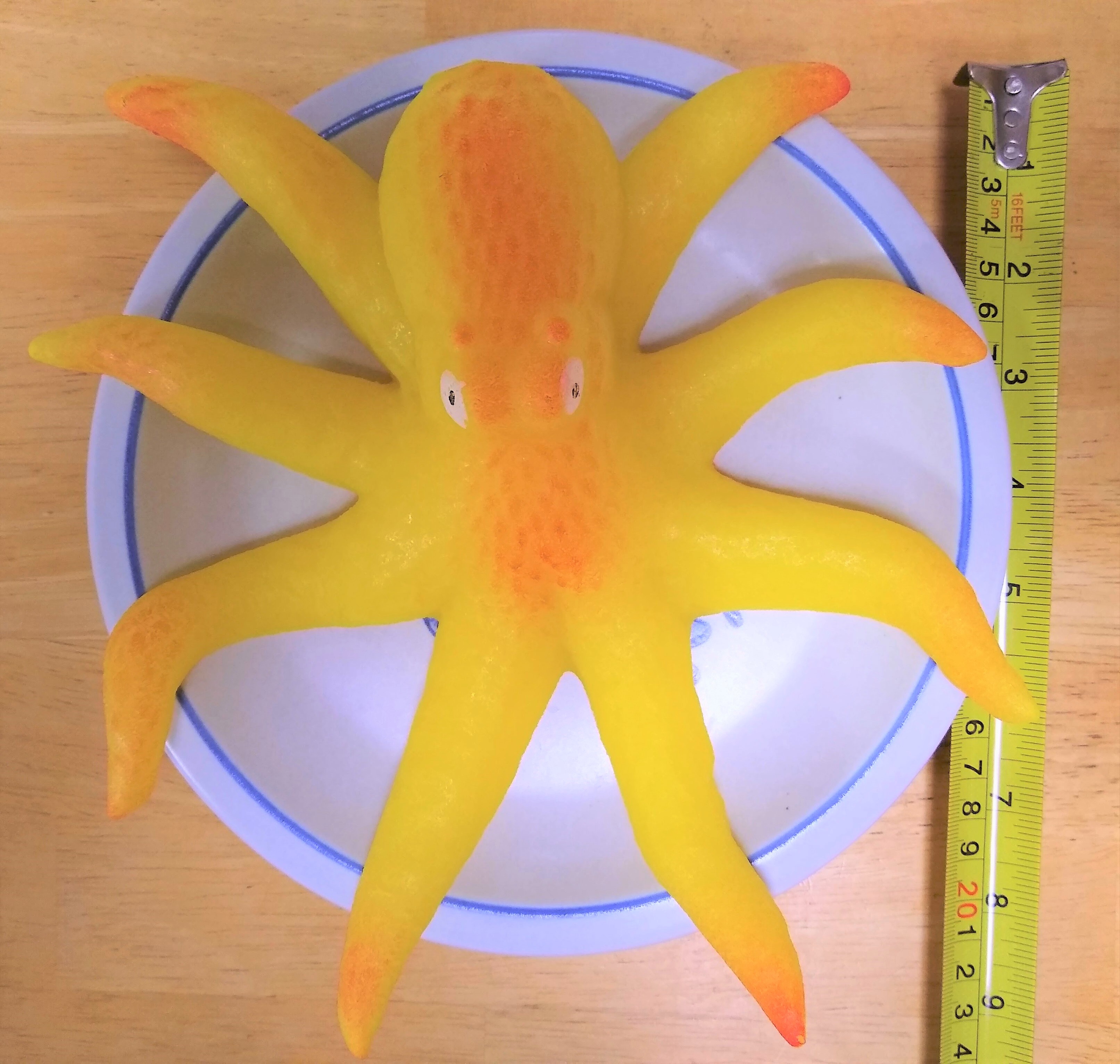 But he's doing it in a strange way. I mean, doesn't he look a tad... fabulous... in the picture on the left? (Maybe you can't see it--some of the tips are now pointing upward). The water is evaporating much more quickly at the ends, so there are those twisty tentacle tips (with flair!) and then the fat, rubbery middle is almost unchanged. :O

I could swear there's a blue cartoon hat-wearing octopus in a similar pose, but the context just isn't coming to me... In any case, I've put a big ketchup-bottle lid between him and the plate now, to let air flow underneath. We'll see if that changes the shrinking pattern at all. :)

In other news, HalfshellHusband is still having a hard time. He's able to get around a little using his walker, though it's painful and tiring. But mainly, things hurt all day and all night (including while he's trying to sleep). It all just gets exhausting. This actually hurts more than the hip replacement surgeries did, which could be because most of the soreness is deep bone pain rather than muscle pain. He's looking forward to when it only hurts if he stands on the broken leg, instead of while he's just sitting or lying down. :(

It's been hot again here, and smoky. The week before last, I bicycled outside 5 times. That was followed by a week and a half of riding indoors, mainly because of the smoke. While a couple of the bigger wildfires from August are almost entirely contained now, several new ones broke out a little over a week ago, so the cycle continues. By the end of the day, it starts to seep into the house until it smells like the inside of a chain-smoker's car. :(

I think I've ridden in the garage (and then the laundry room, thanks to the smoke) more times this summer than I have during ANY winter in the 30+ years I've lived in Sacramento. It's maddening. Elementary, S2 is still sitting in the DVD machine out in the garage. In the laundry room, the WiFi is strong enough that I can finally catch up on some of the Netflix streaming shows that HalfshellHusband doesn't want to see.

So, I'm up-to-date now on Better Call Saul, which is getting increasingly depressing (not surprisingly). If there were a version of it that was just The Amazing Mike Ermantraut, HSH would watch that in a heartbeat, but he doesn't like the rest of the characters. I can't blame him. Mike's sub-stories are definitely my favorite parts. The utter creativity and sheer competence of that character are just fantastic. Now I'm watching A Series Of Unfortunate Events, because HSH thought the premiere episode was kind of dull. That may be because he has no memory of ever reading any of the books. The episodes are not fast-paced, but they're compelling, and reflect an obvious love of the books. The art direction alone! *swoons* The casting of Patrick Warburton as the drily humorous Lemony Snicket! *swoons again* I like the overall casting quite a bit, as well as the unexpected racial diversity. "Mr Trick" (as I think of him) is a delight as the cheerfully clueless Mr. Poe, and Alfre Woodard was a wonderful surprise as Aunt Josephine. I can't get the show's theme song out of my head these days, but it's worth it.

What next after that, though? I just started S3, and at the rate things are going with the outdoors here, I need to start looking ahead. But at the moment, I need to go to bed. :O