I finally saw a baby bunny while I was out cycling last weekend! It had been a while. \o/

Years ago, a coworker rained on my parade by telling me there were no native rabbits here—and that anything that looked like a baby rabbit was actually a baby hare. That was oddly depressing (maybe because hares are more freakish than cute). :( But also...he was wrong! As soon as I saw the huge cottontail on that little bunny, I knew it wasn't a jackrabbit. I did some poking around on Google, and it looks as if our parkway rabbits might be Desert Cottontails? Not the Brush Rabbit, unless when people describe the underside of the cottontail as being "grey," they actually mean a light silver color so blinding that other people call it "white." Here's a sample baby desert cottontail rabbit: 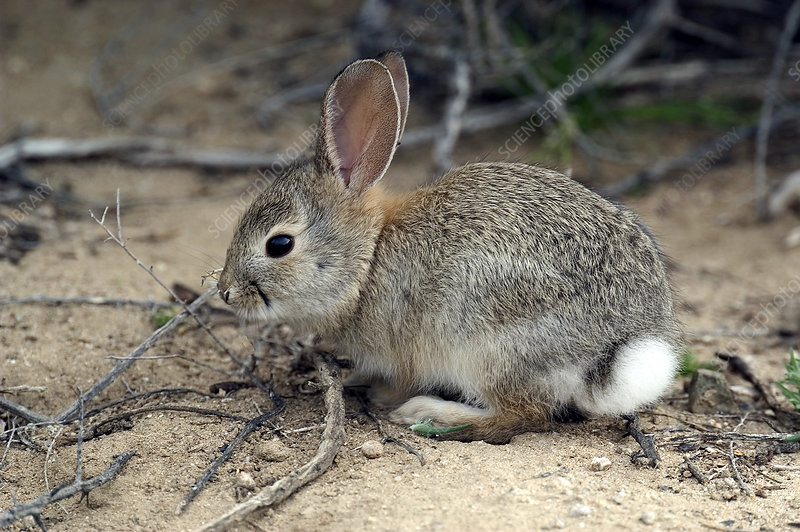 They really are awfully cute! Yesterday, HalfshellHusband saw his first one ever. OTOH, he's seen tortoises crossing the bike path several times, and I never have. I'll take a baby bunny over a tortoise any day, though.

Outside biking has been sporadic, thanks to midweek temperatures rising to near or over 100o these past three weeks, and then a day or two of high winds as the weather systems shifts back over to the low 70s. \o? As a result, I just finished watching Elementary, S1 while biking in the garage, and have now started S2.

In other viewing, we decided to give Lucifer a try via Netflix streaming, and all three of us are enjoying it a lot. It's surprising "light." In between, we're rewatching Sleepy Hollow on Hulu, at least the first season or two (since The Boy missed seeing S1). The two main characters, and their chemistry, were so charming. They totally made up for the batshit mytharc, and it's such a shame the writers/producers destroyed what made that show special. Seeing Jenny in S1, I shudder knowing how much of the storytime she and her various boyfriends will eat up in future seasons, and the effect that has on the overall show. :( So meanwhile... *La-la-la-la-la!*

In book news, I finished the Jack Reacher Blue Moon book last week absolutely hated it (a first), and keep meaning to detail that on Goodreads. I'm almost done with the Joe Sixsmith book I started as an antidote, and then I'll begin a Richard Kadrey novel that is NOT one of his Sandman Slim stories (because I think I've caught up to all the ones he's written. Tragic!)

And for other real life news... I finally got my hair cut yesterday, after 24 weeks. The bangs were really starting to poke me in the eye, even though they were curly. We also did "highlights," which actually consists of a light bleaching treatment to bring the red back out again. None of that was necessary before my early 30s, but then my hair got much darker and the auburn turned to brown. I used to wonder why my older sister was coloring her formerly medium-brown hair so dark (it made her look really pale), and it turned out that she wasn't. It had just gotten much darker as she got older. Same as for my mom and younger sister. \o?

I'm about to start the weekend, which will mean hours and hours of time trying to write my Idol story. It's another Intersection, and that just makes it SO much harder. Meanwhile, I randomly stubbed my foot on the laundry room door today, and kind of wishboned a couple of toes a bit. It hurt quite a lot, and the last time that happened (on a square-legged dining room chair), I broke a toe. Hours later, the injured toe is still painful and there's telltale bruising. It doesn't appear to be as bad as the first time (when I broke the toe clear across the base), but something is cracked or broken above that bottom joint. Bummer. :( :(

ETA: Definitely broken. I can feel the crackling when I move the other toes and it moves with them. Ugh.