Thanks to those of you who sent birthday wishes last week! It was a lovely day, with scallops, strawberries, and chocolate cake—but as separate foods, not mixed together. I took Friday off, and we went out to breakfast, to the hardware store, and to see Bladerunner: 2049. It was all good. :)

I finished the Serial season 1 podcast last week, and let me just say, WHAT??? I wanted definitive answers! Instead, it feels as if there are just more questions. Still, it was riveting, all the way through. I'm less taken with the Orbiting Human Circus of the Air. The regular season episodes were fun. The Bonus Symphony episodes? Mostly noise fragments battling with the narrative for decibels. \o?

If you liked the original Bladerunner, and were not under the false impression that it was an action movie rather than Sci-Fi noir, I think you'll like Bladerunner 2049. Much of the movie occurs during the daytime, unlike the original, but that style of post-acid-rain bleakness is still there. It leaves you pondering many of the issues that the first movie stirred up, about what it means to be a "person," about what constitutes humanity, and about whether an artificial creation can have something akin to a soul—and whether anyone has the right to decide how worthy such a soul might be. Just fascinating.

tsuki_no_bara offered me a birthday link to hedgehog camping pictures, which I now share with you after spamming my family. The tiny equipment! The satisfied-looking hedgehog sitting at his camp table! SO, so cute. :D It makes me want a hedgie all over again, even though they're not allowed in California.

It's almost Halloween, so have this costumed hedgie too. Those fangs are for real! 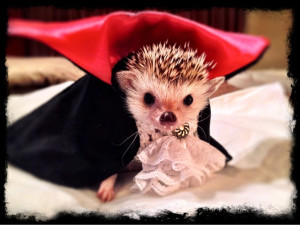