I've talked before about how strange other people's phobias seem—sometimes so strange that you forget anyone could even have that phobia.

Our daughter will be going to UC San Diego this fall, which among other things has a well-respected marine biology institute. We mentioned that, and she said that she'd considered taking a class there, but thought that writing a letter to a professor that said, "I am interested in taking your course, but what are the chances that it might include crustaceans?" would probably be just too weird.

I suggested again that she should try to work on that phobia, and she told me she'd come across a gif on her phone just that morning of a crab with a Putin head running on the beach, and it was the most revolting thing she'd ever seen. It would have to be this, which doesn't strike me as particularly unsettling, but still... \o?

Friday, she told me about a dream she'd had that morning, where she was in an elevator but all of the floors had pictures of food instead of numbers.
Me: Ooh, I'd like to go to the ice cream sundae floor, please.
Daughter: But then I pushed the lobster button by mistake.
Me: Bwah-ha-ha-ha-ha-ha-ha-ha! The "lobster" button!
Daughter: And the door opened, and there were all these horrible lobsters running across the floor trying to get into the elevator—
Me: HAH-hahahahahahaha!
Daughter: It was the worse nightmare I ever had, worse than the one where I was pregnant and someone was chasing me with a knife.
Me: *wipes eyes* Only you could dream about an elevator with a lobster button...

She turned 18 last week (eighteen!), and our son turned 16 on Friday. He had a friend over Saturday, so I made a decorated cake for him. This has been harder since the days when he played with actual toys, but I don't think this turned out badly: 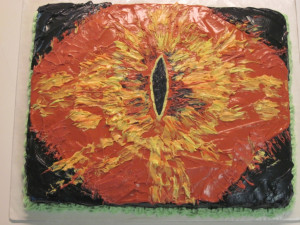 I'd have loved to do the eye suspended between that sickle arch on the tower, but couldn't find really good picture of it that made any sense to me.

The next major birthday is mine, in a couple of months. I hope to be off sugar between now and then, because these last few weeks? Argh.

All right, work looms tomorrow. It's all flailing all the time, for most of the last 5-6 years, and it's hard to look forward to that anymore. :(

So, good weekend for everyone?