Still hoping to get some more votes in the LJ Idol poll! My entry for this week is here, and could definitely use your support.

As promised, the hedgehog cake for my son's birthday! I'd originally planned to just do a giant hedgehog, with the suitably-colored candy-corn spines, but decided on a hedgehog-family tableau instead. Can you guess what unforseen issue arose with this? 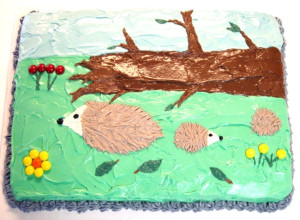 Had I chosen the one giant hedgehog, I think we would have just gone at the cake bottom-up when it was time to eat it. But this little family apparently was so cute that we have to save them for last. So, we're eating a big circuit around the edges instead, and hoping the cake doesn't dry up too much. Why did I not see that coming?

HalfshellHuband and I are up to the final episode of BBC Sherlock, S2, which means that we've detoured away for a bit since we know S3 is not out yet! We haven't gotten around to S8 of Dexter yet, but started in on S3 of the BBC's Luther instead. I like Idris Elba in this series so much. Unfortunately, we have to drag Boom Buddy into the living room and hook him up to the PC when we watch this show (and so many British productions). The opening of Luther S3 went like this: rain, barely-audible-dialogue, rain, working-class-mumble-dialogue, helicopter (are you f-ing kidding me?), at which point we stopped and went to fetch Boom Buddy. European mic-ing and audio-mixing are a crime, I tell you.

So, I went running and did some yardwork (augmented by visits from The Mouth, aka the Whale cat). Now it's time to try to fix my daughter's butterfly chair and hit the LEGOs again. Will that last project ever be done? :(