I finished my LJ Idol entry for the week, which is here. It was another midnight-oil project. Who needs sleep during the work-week, anyway?

I promised to post a picture of my daughter's birthday cake. Even she doesn't know why she picked a giraffe. However, she elected not to have a party this year, and thus none of her friends would see it. No party for her 16th! She's caught between suddenly feeling overwhelmed by groups of people and not wanting to hurt the feelings of the potentially uninvited. Well, regardless, here is the cake: 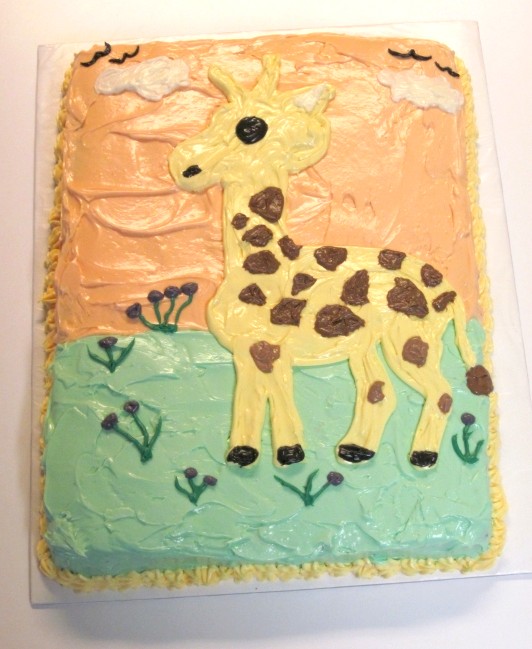 Based on this and the notion of not doing a party either (both kids are getting older, so no surprise there), her brother has decided that he would like a hedgehog cake. I spent some time looking for "spines" today, and I think a new tri-colored candy-corn (brown, white, gold at the tip) will be just about perfect.

Other news: My biking shoes are wearing out, so I looked around online for some replacements. It looks as if I may have to buy a whole new type of pedal/shoe system, which is not the answer I wanted. I'd still be using toe clips, if anyone made shoes for those anymore! Ugh. Let me dinosaur in peace...

I tried Arrested Development out on the kids last week, and just as expected... my son loves it as much as I do, and my daughter doesn't find it particularly funny. Same results for Monty Python, Hitchhiker's Guide To The Galaxy, and Futurama. I think you really have to love all three of satire, irony, and absurdity, or the humor just won't fully work for you. The self-contained irony of Lucille Bluth complaining about 'the homosexuals' because Everything they do is so dramatic and flamboyant. It just makes me want to set myself on fire, or the existence of the Bluth stair car, or the Spanish daytime "Desi" awards ceremony... each of those is a different genre of humor, and I like them all. I think Reaper was the last mainly-humor show the rest of us liked that appealed to Lauren. Last night? Christopher and I watched the Futurama episode where Fry wins a trip to the Slurm Factory, and there is a lengthy sendup of Willy Wonka And The Chocolate Factory (including acknowledging just exactly how creepy those Oompa-Loompas are). \o/